Please read the information about our apps carefully to determine if they are applicable to your needs BEFORE purchasing.


ABC Logbook. A significant addition to the ABC suite of observation/data collection apps. ABC Logbook features are listed below. It includes access to a free inter-observer reliability program that allows the user to easily compare observations and select parameters to calculate both event and interval based IOR. In interval mode, Cohen's Kappa is calculated in addition to the traditional Agreements divided by Agreements and Disagreements. Further, errors of omission and errors of comission are highlighted in a display of the data stream to enhance error resolution and speed training of observers in achieving reliability. 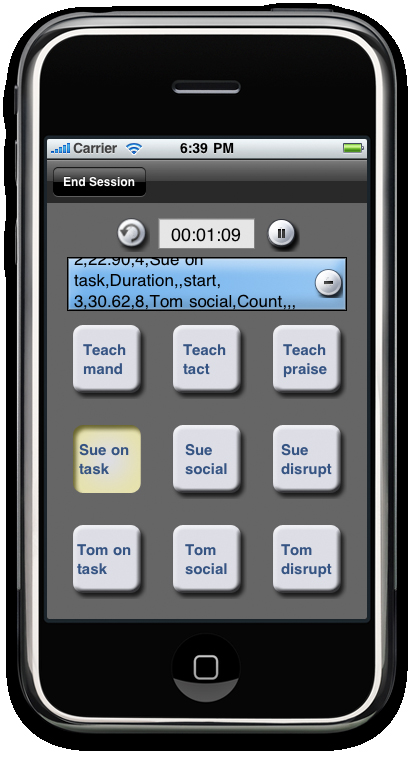 A given set of 9 buttons can have any combination of these, and could refer to individuals in a group, or an individual with 9 behaviors, or 2 individuals each with 3 behaviors and then general 3 ‘event’ buttons, etc. To the right is a simple example set up for a teacher and two students:

Overlayed on this interface are 3 modes. The first mode is free form recording. The user can start and stop an elapsed time display and simply observes to any arbitrary end point. The second mode is interval recording. The user sets a total observation time and then specifies the length of each interval. The timer is started and a countdown mode by interval begins. The default output is the standard partial interval recording format. Importantly, and it reflects our bias for non-rigid systems, even in interval mode, count and duration functions can be used. Interval and count/duration are often seen as mutually exclusive. This is most likely influenced by the technical difficulties of the data collection process and the task load on the observer. The great aspect of sophisticated devices is that we can break these arbitrary distinctions as we place no additional task load on the observer but rather can extract much more information from the data stream.

The third mode is for FBA. The basic interface remains the same, except there are 3 associated screens (each with independently programmed set of nine buttons) – Antecedent, Behavior, and Consequence. Behavior is the ‘home’ screen and to access the antecedent screen one simply ‘flicks’ the screen right to move it into place, and then ‘flicks’ left to expose the consequences screen. This intuitive screen control results in a very simple, fast interface to conduct such complex observations. This mode can be thought of as having 3 side by side screens of 9 buttons that pass under a viewing ‘window’.

ABC Data Pro is a sophisticated tool and it is assumed the user is completely familiar with the operation of their iTouch or iPhone, such as all editing functions, and that it has been previously setup for email use. We strongly recommend placing the iPhone in 'Airplane mode' prior to beginning an observation session so that other phone functions do not interrupt your recording.

Available on the iTunes Store!
A straightforward 3 event timed data collection App for the iPhone™ and iTouch™.

Created to assist professionals and students in Applied Behavior Analysis (ABA), ABC Data is an unobtrusive data collection tool for counting behaviors and recording session duration. ABC Data can also be used as a simple stopwatch or tally counter.

Note: Because the iPhone can interrupt an App, eg. an incoming phone call, we recommend utilizing "airplane mode" when using ABC Data. 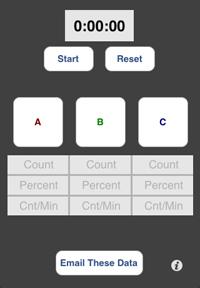 Have we missed something?

Is there a feature or product you would like to see in the future? Please contact us and let us know!